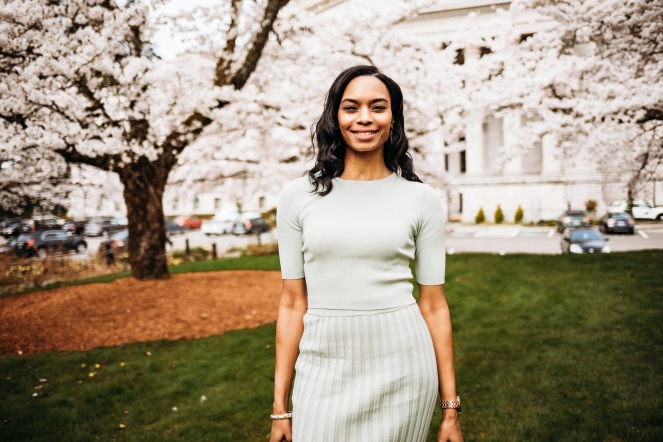 Nobles is a wife, mother of four, former small business owner, an educator and mentor, and an elected official on the University Place School Board. Currently serving as President and CEO of the Tacoma Urban League, T’wina has nearly 15 years of experience in education as an instructor, PTA leader and School Board member. Now, she’s running for State Senate in the 28th Legislative District because she believes that our kids deserve a world class education. She also wants to fight to keep our communities safe and healthy, to invest in transportation infrastructure while reducing congestion, and to tackle the affordability and housing crisis in our state.

T’wina’s story begins in Frankfurt, Germany where both of her parents were stationed for four and a half years. Her family later moved to Fort Ord in Monterey, California before eventually creating roots in the Fort Benning/Columbus, Georgia area. It was after this move T’wina’s childhood took a dramatic turn. She suffered many years of abuse and homelessness. T’wina’s family lived in nearly every homeless shelter in the Phenix City, Alabama and Columbus, Georgia area. When T’wina was 13 years old, things were so unstable that she decided to remain in an Alabama shelter alone and was moved into the foster care system at age 15.  She and her brothers remained in foster care until their father was located in California and custody was turned over to him.

Statistics show that one in five foster youth become homeless after the age of 18 and less than 3% will earn a college degree. T’wina was determined not to become a statistic. Because of her passion, energy, and hard work she graduated high school and set her sights on becoming an educator.

T’wina met and married her then-husband and the family was relocated at Joint Base Lewis McChord (formerly Fort Lewis) nearly two decades ago. T’wina comes from a military family so she knows the sacrifices military families make each and every day for our country. It’s one of the reasons why it was important for her to help other military families by coaching cheerleading and basketball at Fort Lewis as well as with the City of Lakewood and Lakewood Family YMCA.

Education has always been central to T’wina’s life and she believes strongly in giving back to the community that helped her succeed to where she is today. Shortly after relocating to Joint Base Lewis McChord, T’wina attended the University of Puget Sound, where she earned her undergraduate degree in U.S. Politics as well as a Master of Arts in Teaching. She worked as an instructor for Metropolitan Development Council’s College Bound program at Stadium High School and Lincoln High School, which supported student leaders as they prepared for life after high school. She also co-founded Ladies First, an in-school and after-school program dedicated to empowering young women and building positive self-esteem.

On the University Place School Board, T’wina works to make sure that every voice is heard and every child succeeds. She’s demonstrated her leadership through a focus on equity, inclusion, and transparency. Because of her background and experience on the PTA, she has worked hard during her term on the School Board to improve engagement with community members and parents. She knows firsthand the struggles of parents in our district because she also has three children in public schools and one who graduated Curtis High School not long ago. T’wina’s focus in Olympia will be to invest more in education and in teachers to ensure that our students graduate with the skills and support they need to succeed in the future.

T’wina is also a TEDx speaker.

T’wina and her family live in the West Creek Estates part of the 28th Legislative District located in Fircrest.

Ladies First is dedicated to empowering women and girls to make healthy decisions. View all posts by ladies1storg

I truly enjoyed spending my lunch hour with Mayor Victoria Woodards recording a @pbs @northwest_now segment focused on leadership at one of our wonderful higher education institutions. @BatesTechnical, thank you so much for hosting us this afternoon.
It’s school levy season in Pierce County! Ballots are out. #Vote YES for University Place School District schools and return your #ballot ASAP.
✨ Today I present my VERY FIRST resolution to the state senate in honor of the life and legacy of Rev. Dr. Martin Luther King, Jr. ♥️ Tune in to www.TVW.org at 11:45 AM PST for live coverage of our pro forma featuring a couple of my constituents Rev. Dr. Eric D. Jackson, Sr. and my sweet son Rhys, as well as a beautiful rendition of the Black National Anthem sung by none other than Tiffanny Hammonds!
Look who made the Nice List! 🎄
On this birthday I simply wish to thank God for answering all of my prayers and making all of my dreams come true. ⭐️ All the glory to God.
What a beautiful evening to network with state leaders from across the country. Thank you to The American Pharmacists Association for hosting us for a reception and dinner on our first evening of the Hunt | Kean Leadership Fellows Program.